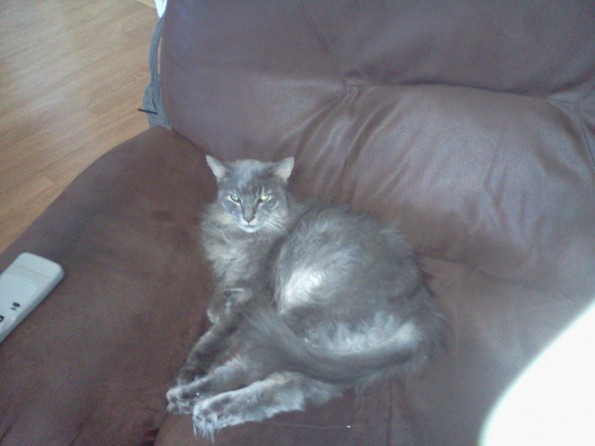 On September 17, 2003, my family adopted Don. He chose my wife in the cat colony room. Don reached out from the top of the spiral stairs and gently touched her shoulder. In the private room, he let her hold him on his back like a baby and he fell asleep. It was love at first sight and she was hooked. Soon we all were, and I’d always been a dog guy!

The reason he was surrendered: responsibility was too much. They were right. Don demanded all of our attention. He wanted to be held, loved, and conversed constantly until he got what he wanted. He was a pain that soon had the entire home revolving around him.

Don was a ratty, bony, cross-eyed little man. Not the most handsome, but he was the smartest, most loving, and most unique feline that we’d ever encountered. He wormed his way into our family, our life, and our hearts.

Three years ago Don was diagnosed with feline diabetes and was given six months to live. He fought hard. We thought we had lost him several times but he kept snapping back. Eventually the diabetes deteriorated his bladder, kidneys, and finally his mind to the point that he was in constant distress. It was heartbreaking to see him like that.

On June 6, 2014, we had to make the hard call and put him to rest. We thought you guys might want to know. You can chalk this adoption up as a huge success story. Thanks for introducing us to our little man.